Our second day on the Camino was one of spiritual opposites.

Arriving in Roncesvalles, after having crossed the low Pyrenees, we jostled among the hordes of arriving pilgrims for two beds in the church refugio. We queued in line for a short while before presenting ourselves to reception, humbly asking for a private room. A rolling of eyes and dismissive snort later, we received our assignments of bunk beds, paid our modest fee, got the first stamp for our crisp, new pilgrim passports, or credencial, and trundled off to our garret.

We were not sure how we would fit into the refugio way of travelling. It is, without doubt, the accepted mode of accommodation on the Camino. Refugios, or albergues, are humble, communal lodgings befitting the religious roots of the pilgrimage. Set up by churches and municipalities at regular intervals along the Camino route, they offer very basic sleeping spaces in a dormitory setting for 10 or so Euros per person, often including communal meals and religious service as part of the deal.

We prepared ourselves for refugio stays, packing sleeping bags and earplugs. But, truthfully, we value a bit of privacy at night, our own space in which to relax, a place to discretely have a hot shower.

Not that the Roncesvalles albergue was a bad place to spend a night. It was very clean and modern with bunk bed furniture that provided some sense of privacy. But we still looked across to strangers in beds an arm’s length away and it was a long trundle down a corridor in the middle of the night to the bathroom, a reality of the communal lifestyle.

Sleeping concerns aside, the evening ended on a satisfyingly spiritual note. After our first Pilgrim Mass in the gothic Iglesia de Santa María (consecrated 1219), we sat down with new friends for a simple dinner of salad, spaghetti, dessert and wine. This is where bonds are first cemented with fellow travellers from around the world, travellers who we would cross paths with along the camino. We shared stories and backgrounds, tales of that first day crossing the foothills. And then we returned to our respective bunk beds, too exhausted to noticed the snoring pilgrims around us.

Our departure from Roncesvalles was a wet one. Heaps of pilgrims piled up at the door to the albergue, stopped in their tracks by the downpour outside. Out came our Goretex coats, our rain pants, our rain hats and our pack covers. Just as the first day was a test of our physical ability, this rainy day was a test of our equipment. The system worked for the hour it was needed, rain giving way to drizzle, then evaporating into fog not long after our day’s walk began. Fog cloaks all in mystery, appropriate as we passed through the small village of Burguete where witches were burned at the stake in the 16th century.

Fog dissipated into grey overcast as our journey continued through industrial mining territory, signs first admonishing us not to leave the path and, finally, you made it through! “Buen Camino”. Our day’s walk, punctuated by quaint small villages, lush forests, grim history, rain-saturated landscape and industrial scars, deposited us at our destination Larrasoaña, 27.4 kilometres later.

Boasting a population of 200, Larrasoaña has a dormitory-style albergue and two private pensions. Wanting to try a private room, we opted for El Peregrino, which offered a pleasant room with breakfast for about $40 CAD. Asking our English-speaking host for restaurant suggestions, he proposed the usual village eatery catering to pilgrims but made mention of another restaurant a kilometre further out of town, a better place that happened to be a one-star Michelin restaurant.

A brief aside is in order. In the early 1980’s I went on a solo road trip through France, focussing on its wine-growing districts. Well before personal computers, the internet and online bookings, I opted to use the Michelin Red Guide to France because it offered accommodation and restaurant recommendations for every small town. I was new to the sacred Michelin rating system but soon fell into the culinary treasures of a starred restaurant experience. These were shrines of high cuisine, worthy of their own (albeit far more costly) pilgrimage. In 1990, Gail and I honeymooned our way across France, Michelin Red Guide in hand once again, dining in many of the more-affordable one-star restaurants before working our way up to the high altar of Paul Bocuse’ three-star temple in Lyon. The vision of a delicate truffle soup hidden below a crown of puff pastry still occupies prized shelf space in my deteriorating memory.

So it is not unexpected that the mere utterance of “one-star Michelin” by our host, here in the tiny hamlet of Larrasoaña, was sufficient to guarantee this would be our night’s entertainment. Our host made the reservation on our behalf, explaining we were pilgrims and asking that they open the restaurant at 9:00 pm, one hour earlier than usual (more on the unique Spanish sense of time in a future post). Off we trundled on a pilgrimage of a different sort, walking along a busy highway to the Restaurant El Molino De Urdániz. It was already dark but this historic stone mill, windows glowing warmly with incandescent light, was a welcoming site. Alone in the stone -walled dining room, we were presented with a menu well beyond simple translation with iPad decoders and least of all by our unilingual waitress. Fortunately, what seemed to be an à la carte menu, turned out to be one long 16-course tasting menu. So we set aside the words and waited for the delicacies to come, whatever they might be. And come they did, miniature pieces of sensual art, each an unexpected visual and taste exploration and each more exotic than the last plate – or piece of wood or jar. We raised our glasses of Rioja in praise of our young chef, David Yárnoz.

A pilgrim can follow many different spiritual routes on the way to Santiago. Two days in and it was clear our pilgrimage would take us in many directions. 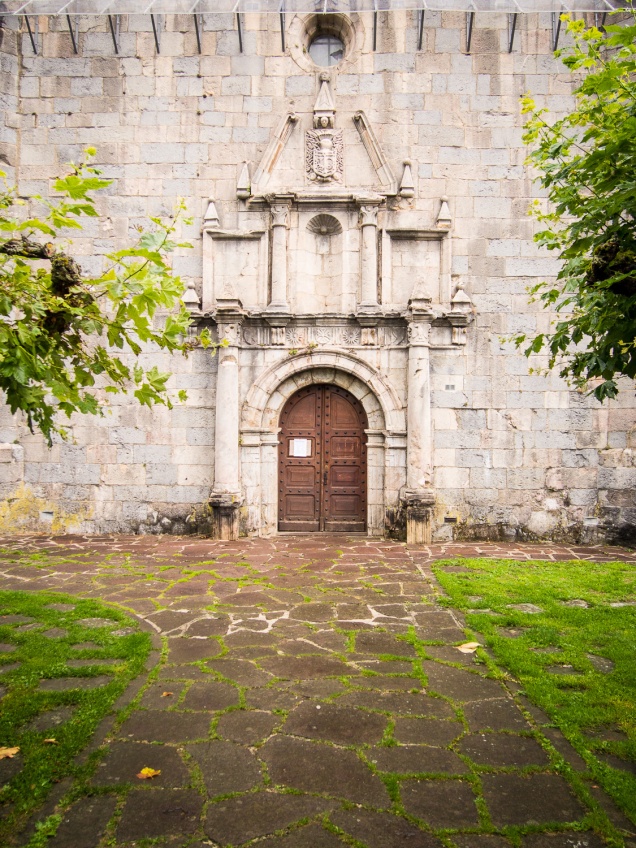 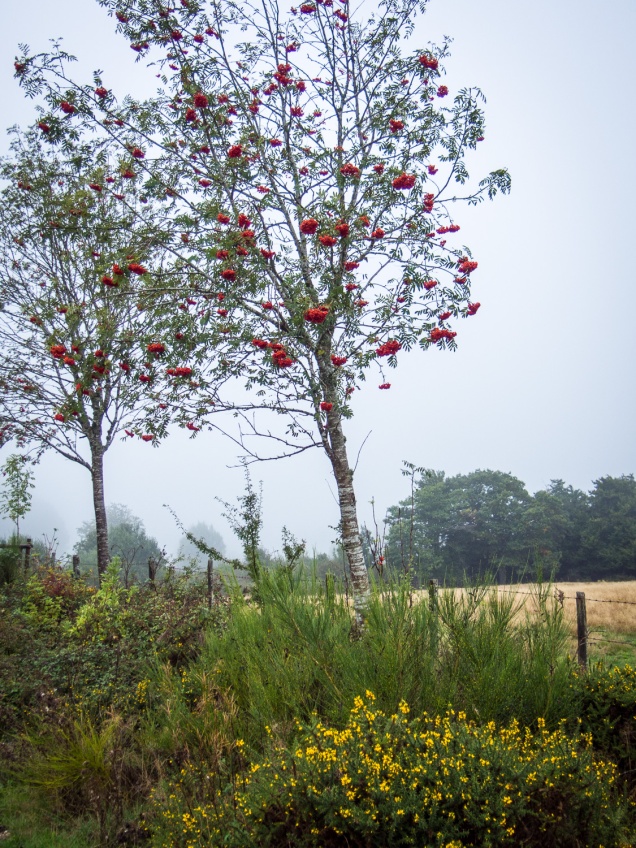 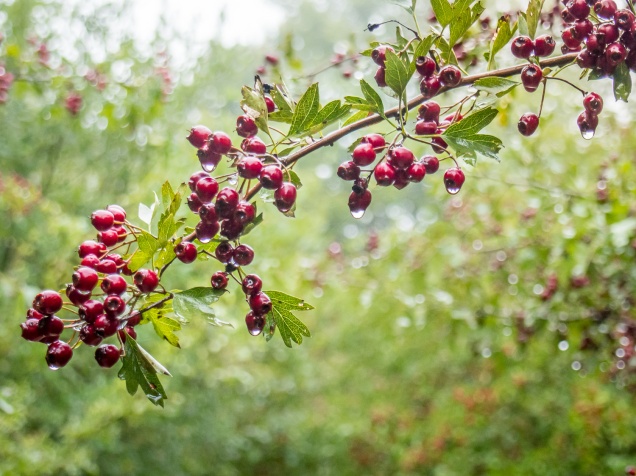 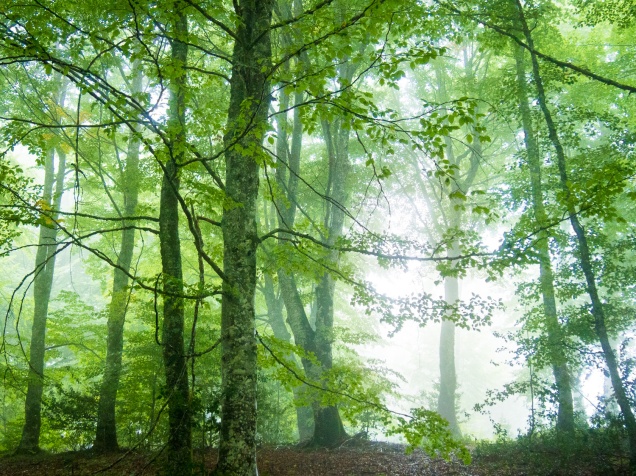 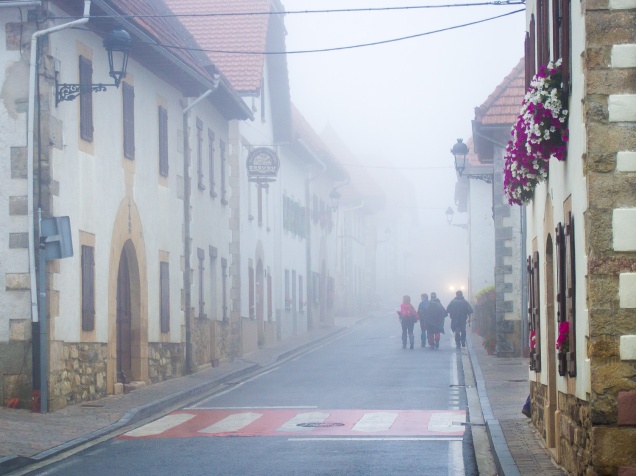 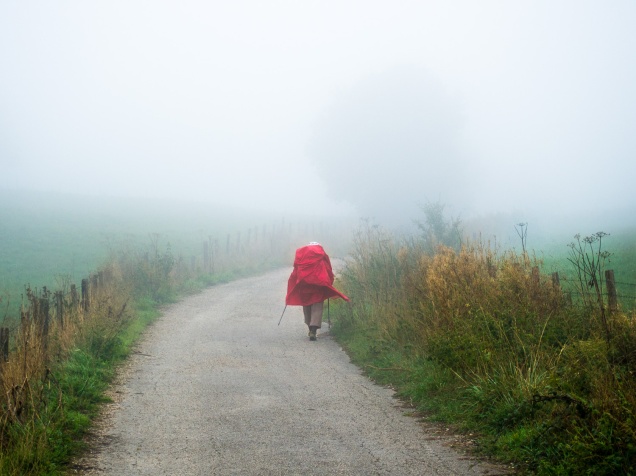 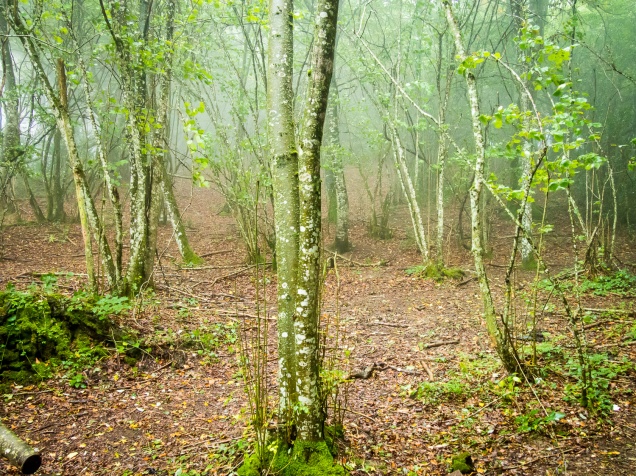 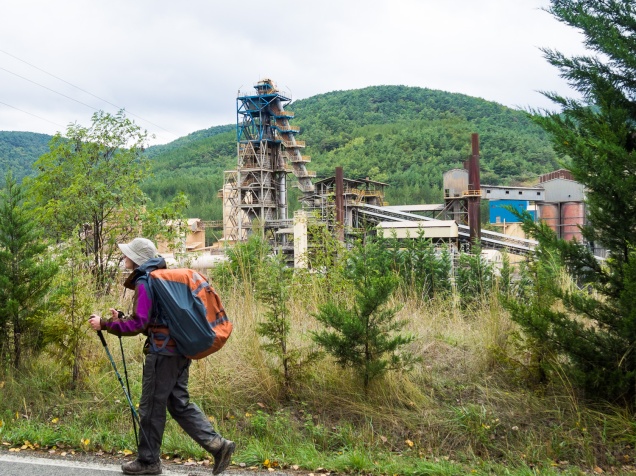 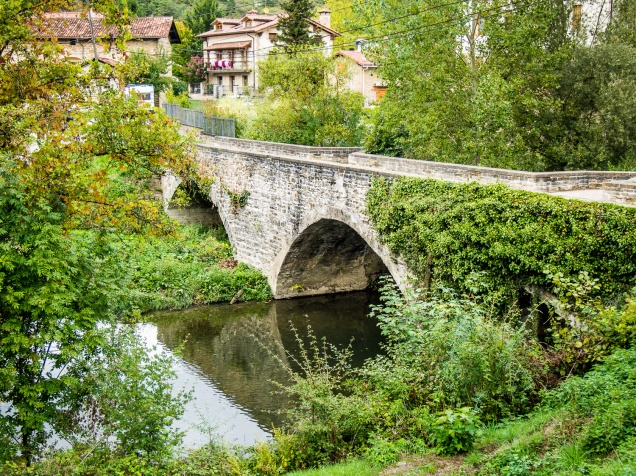 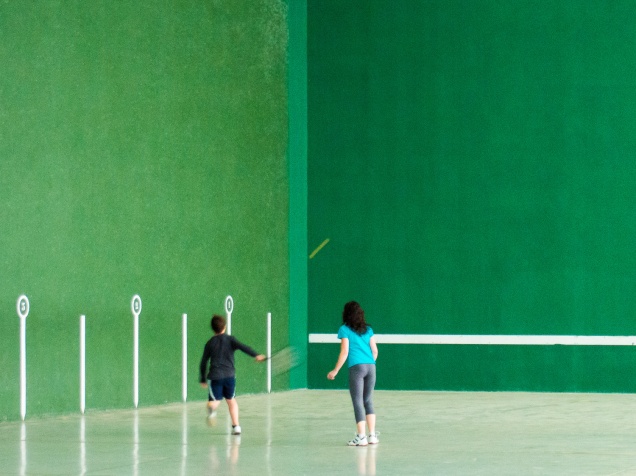 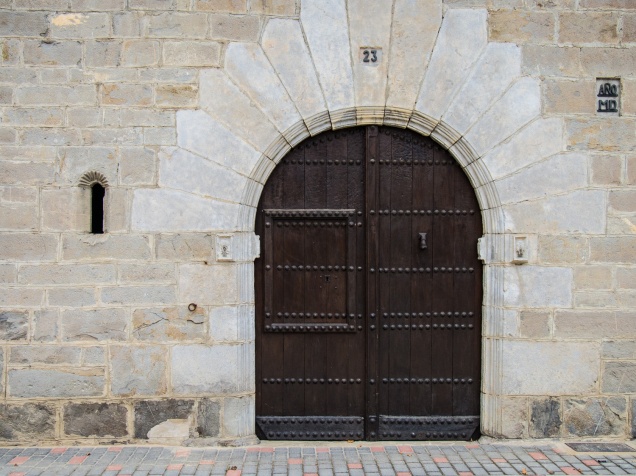 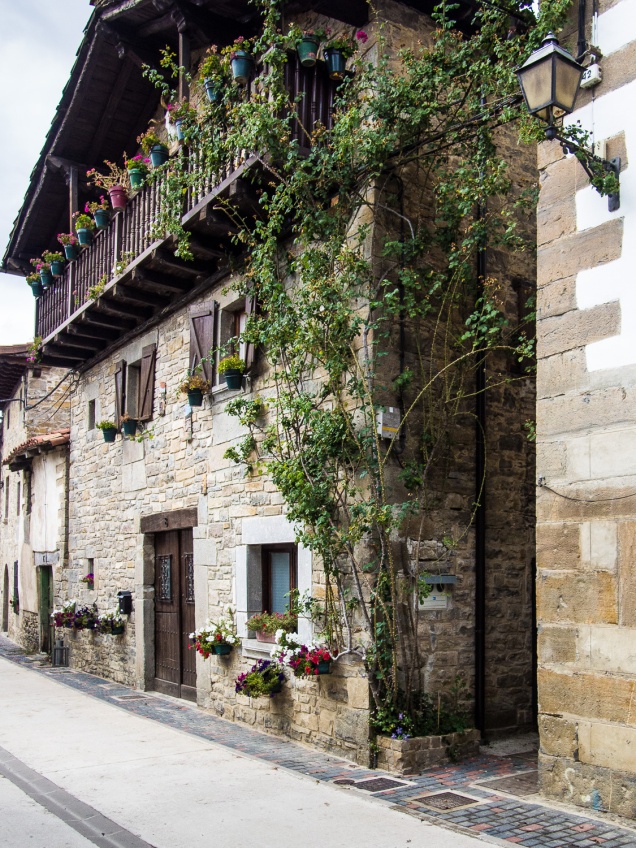 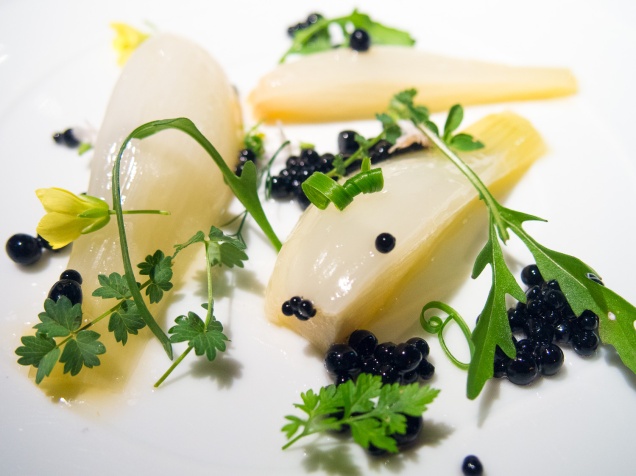 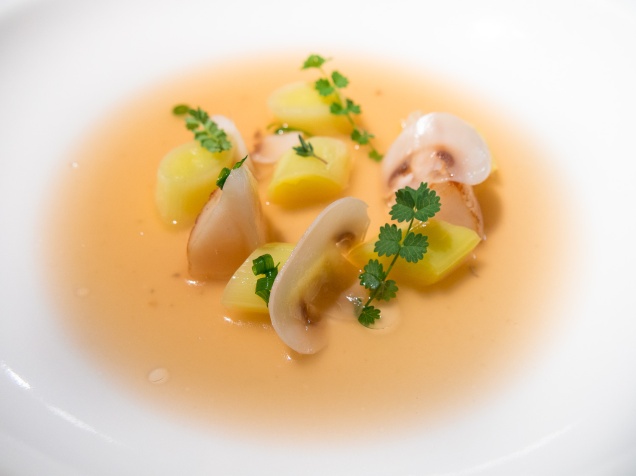 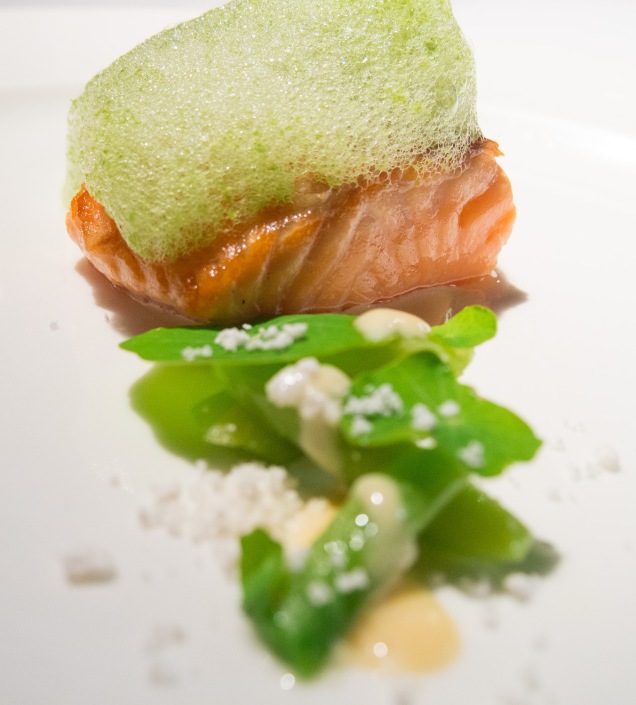 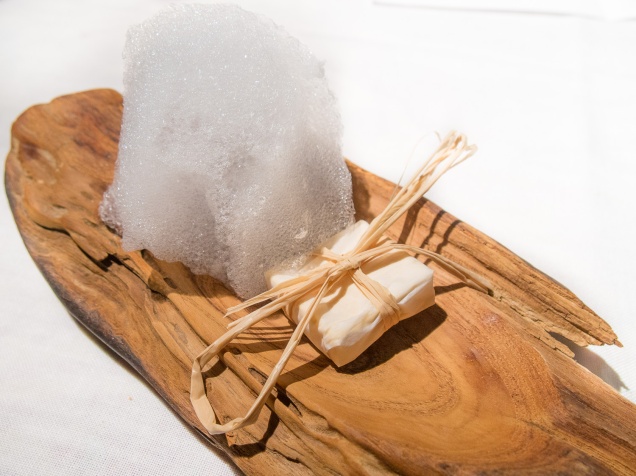 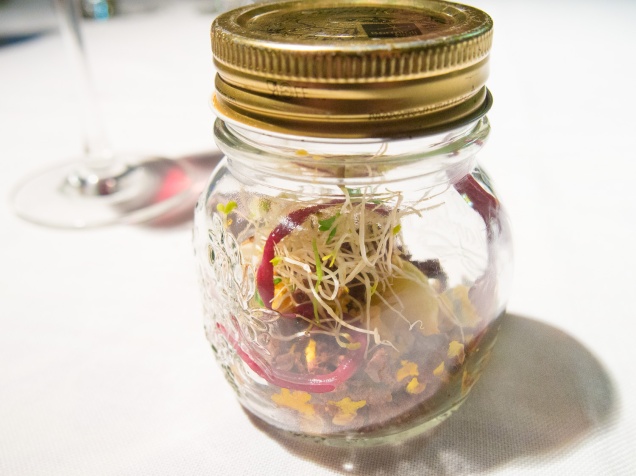