Today is a rest day. Free of hours-long walking. A chance to visit local sites. And to eat, of course.

Unfortunately, Ainan Town does not seem to offer much in the way of nearby sightseeing opportunities. So we hop on a bus and head east, down the coast to the larger and more promising city of Uwajima. 72 minutes later, we arrive at the train station in the heart of a much more bustling metropolis.

It’s still early morning. Castles, gardens and temples beckon. But I am immediately waylaid by the site of a Lawson convenience store.

Japan seems to love its convenience stores. Pilgrims love them as well. Here’s a place to get a good coffee, a can of beer or bottle of sake. And the washrooms are always clean. The familiar Seven-Eleven chain can be found in most large Shikoku cities, the one place, other than a post office, with ATMs that accept foreign bank cards. There are other chains too, like Circle K and FamilyMart stores.

But Lawson convenience stores are omnipresent on Shikoku. Oddly, the chain originated near Cleveland, in the United States. Today, it is an entirely Japanese enterprise. Always spic-and-span shiny with the cleanest of all washrooms. Every community on the island seems to have at least one. Larger cities, like Uwajima, are fairly littered with the stores. The western-style logo on the brilliant blue background is a sight to behold on the pilgrimage route. And for this pilgrim, it is ground-zero for a much sought-after culinary treasure. One that usually is sold out well before noon. A delight I may have overlooked had it not been for chef Anthony Bourdain who, in one of his globe-trotting television shows featuring the food of Japan, declared this delicacy a guilty pleasure.

And here I am, mid-morning in Uwajima, scouting the refrigerated shelves of a Lawson. And there it is, in its triangular plastic container, all white bread and creamy yellow. The prized Lawson egg salad sandwich. At long last! Convenience store bliss.

Uwajima Castle is also good. Sitting atop a forested outcropping, it dominates the city skyline. This is one of only 12 castles in Japan that remain as originally built. The interior is dominated by an intricate puzzle of 400-year old heavy timbers and masterful joinery. Steep wood ladder-stairs lead up to the top floor lookout with panoramic views over the city, the mountains and the sea.

It’s back down to the port for lunch, at a cafeteria-style restaurant in Kisaiya-hirobi market. Gail has a bright bowl of sashimi on rice. I try a local dish, Tachi-uo no maki-yaki, scabbard fish grilled on a bamboo stake.

Our afternoon is spent at Tenshaen Garden. This compact urban oasis was  built in 1866 by Munetada Date, the seventh feudal lord of the Date clan. The clan’s ancestor was Fujiwara, fuji being the Japanese word for wisteria. The trailing white blossoms of wisteria fall from trellises throughout the park. A bridge resplendent with white wisteria gently arches across the garden’s heart-shaped pond to a small island representing Jodo, or Perfect Bliss.

We return to Ainan City late afternoon, leaving enough time for a leisurely bath and our second dinner at Ryokan Yamashiro-ya. As wonderful and filling as last night’s dinner was, our hosts seem determined to outdo themselves on this second evening. Meat, fish, seafood and vegetable dishes pour out of the kitchen, one after the other.

It is an extravagant feast. Perfect bliss, indeed. 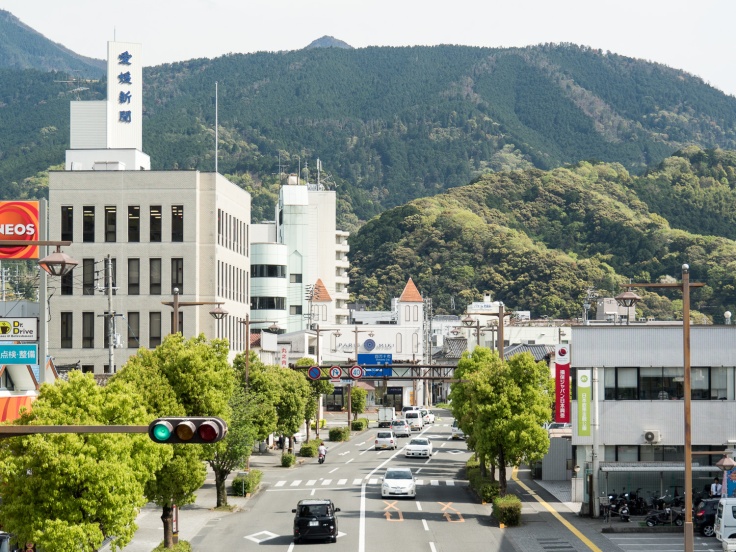 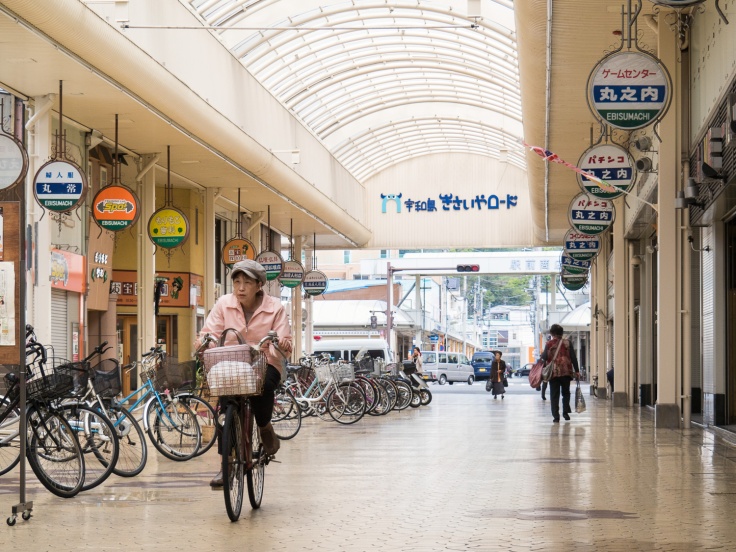 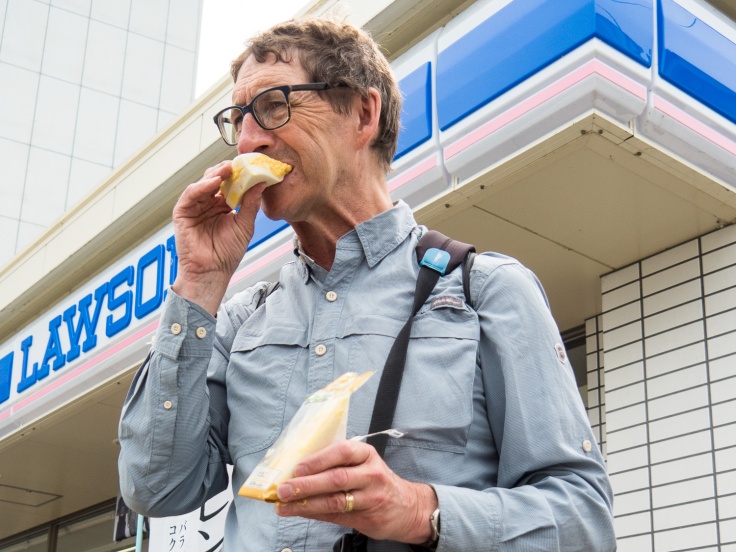 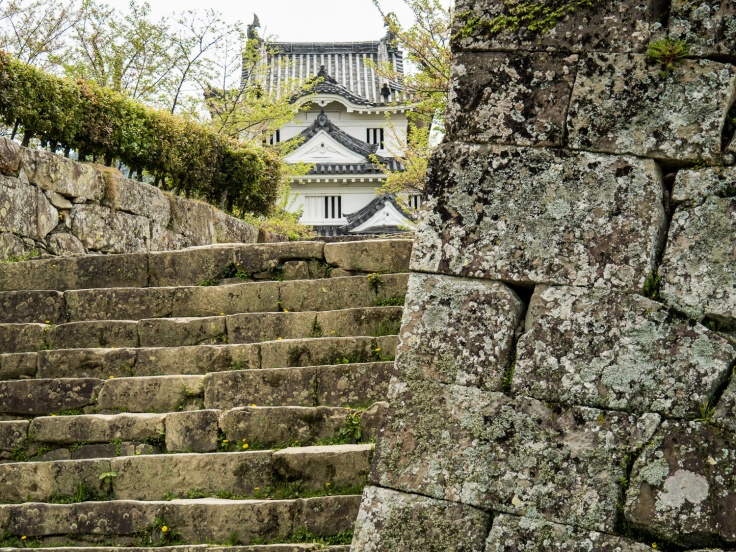 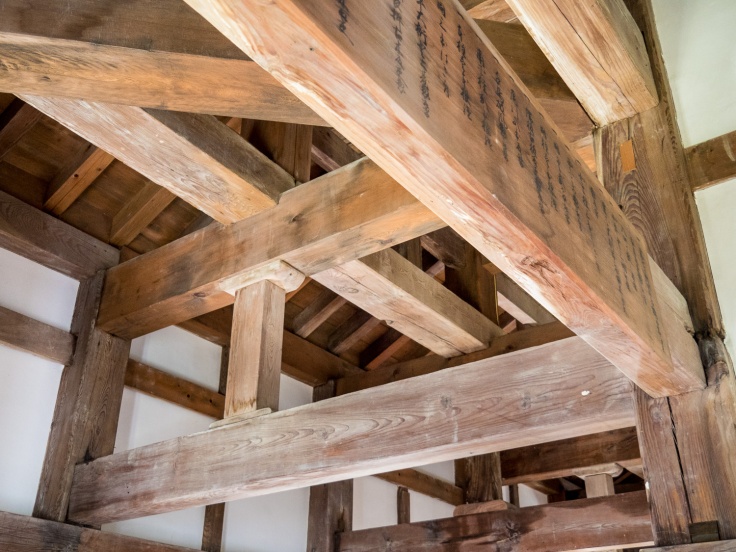 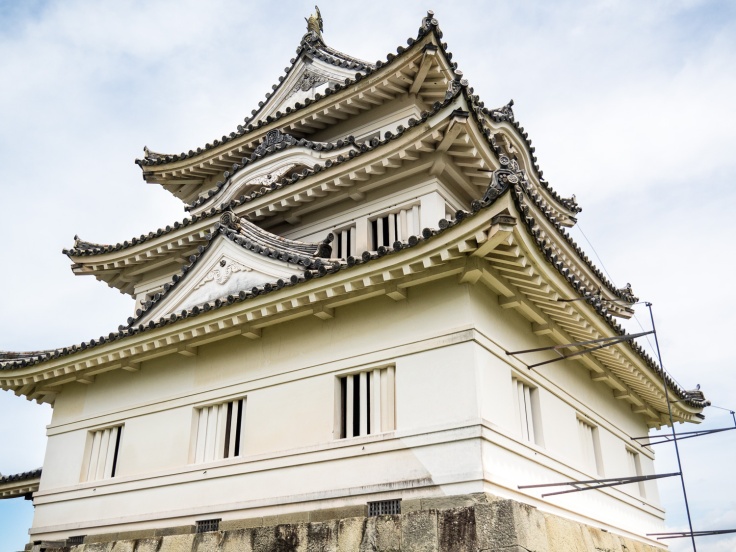 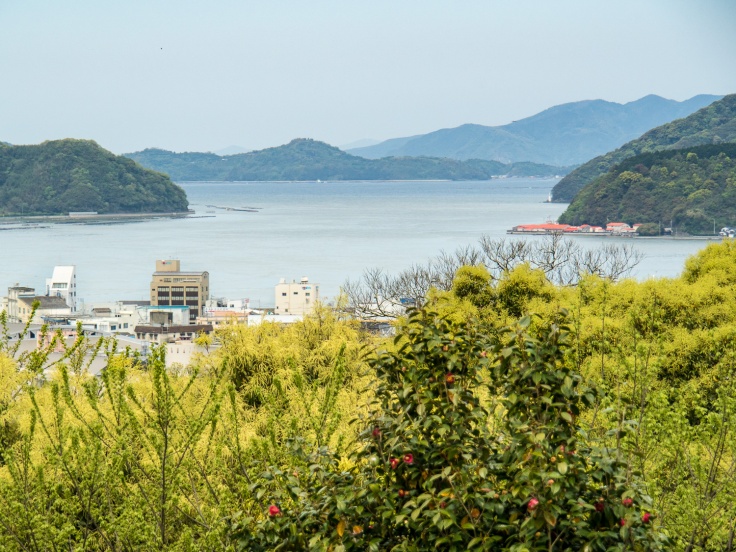 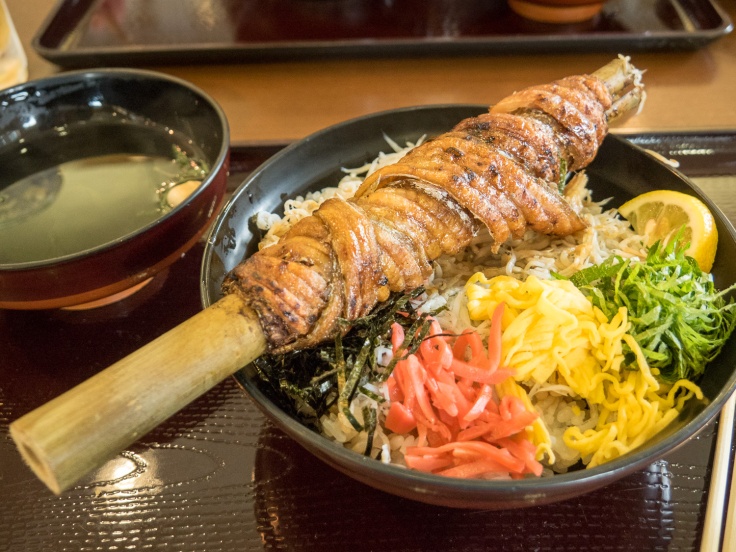 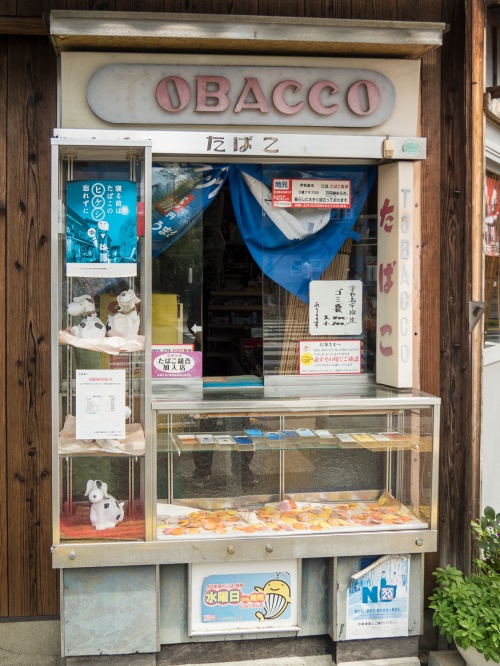 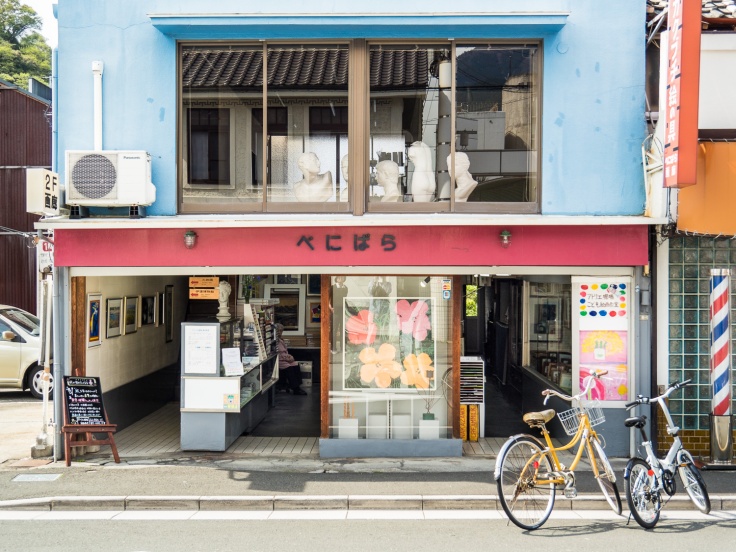 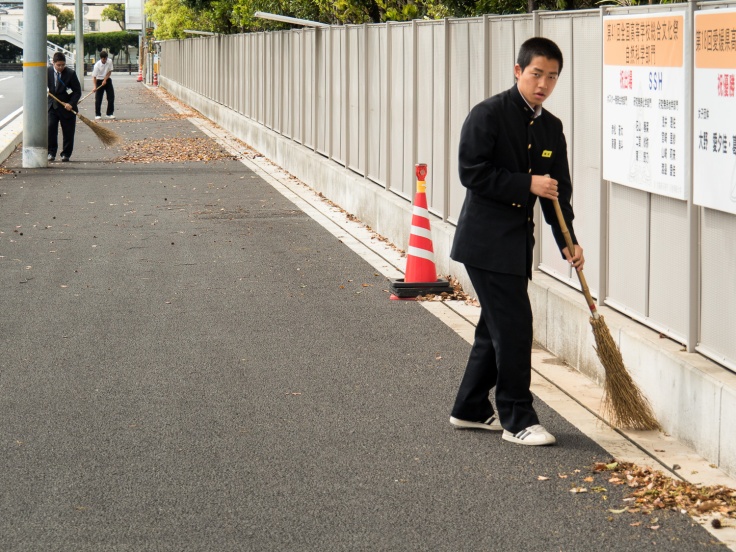 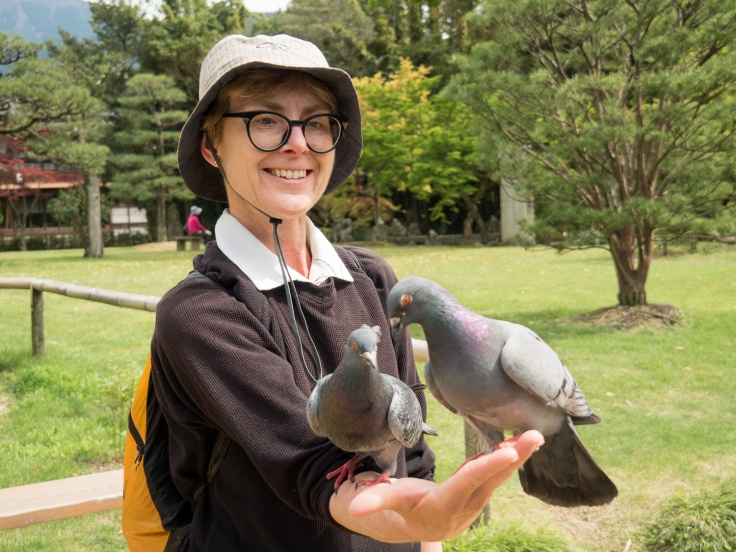 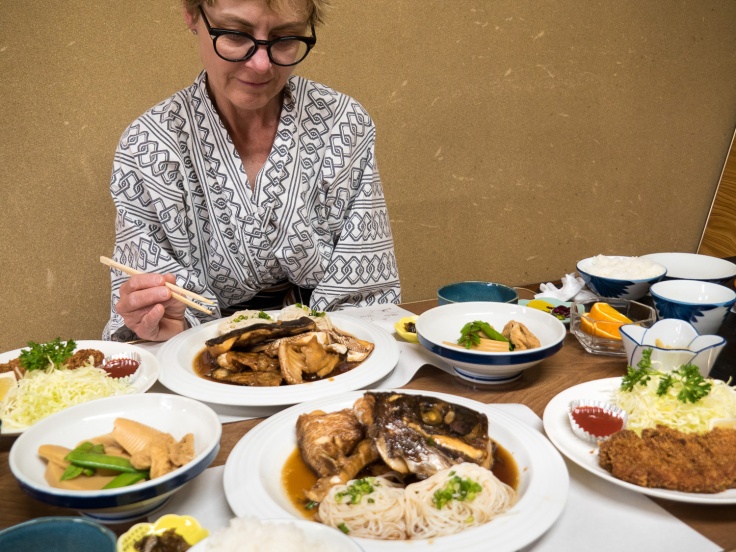