It starts with Moves, a smartphone app that tracks my every movement, second-by-second, day-by-day. How far I have walked. Where I have run or biked. My destinations and how many times I have visited them. My life in motion, quantified.

Frankly, I rarely open the Moves app. It just runs in the background, non-stop, collecting data and automatically sending it to the cloud. More on that later.

My focus is on Move-O-Scope, a ‘connected app’ that uses the data collected by Moves to create a visual representation of my journeys. In other words, a map with tracks. As of November 24, 2016, I have accumulated 52 weeks of data. The Move-O-Scope screenshots, below, show what that year of walking looks like. Remarkable!

Move-O-Scope is not really an app in the smartphone sense of the word. It’s a webpage, preferably viewed on a large desktop screen.  Move-O-Scope assigns a URL specifically for my data. I can bookmark this address and return to it later, updating the map with my latest walks and destinations.

The webpage displays the complex network of my daily tracks overlaid on a black background and dark grey geographical data. I like that the map information is muted, almost disappearing. It is the colourful spaghetti of my completed walks that takes centre stage, a complex sketch of my year on foot.

The Move-O-Scope interface provides a number of ways to analyze my movements. Sliders and buttons can be used, for example, to select the time period to be shown, right down to the hour of the day. While this is interesting, I like to see where I haven’t walked. The black holes between the tracks. Why have I not walked there? When will I walk there?

The Moves app is an activity monitor that tracks my movements, whether by walking, running, biking or driving a car and is intelligent enough to recognize each mode of movement. There are quite a few connected apps listed on the Moves website, primarily health and fitness related.

The Moves app presents my activity in diary format, day-by-day. A swipe down on the screen shows all my treks for the day and where I’ve been. A swipe side-to-side takes me on a chronological journey through my year of walks. The app works smoothly and the interface is quite well designed. But there are a few glitches to be aware of.

The distance travelled, as calculated by Moves, is a little inaccurate. When compared with distances shown on my MotionX-GPS app, Moves suggests my walks are longer than they really are. This may be because Moves collects data less frequently as I walk, resulting in fewer track points and a less informed recording of where I actually walk.

Moves is occasionally fooled by a quick walking pace and categorizes it as a run.

Because Moves is always working in the background, my iPhone battery quickly depletes. I run it on my iPad instead. Note that a cellular-capable iPad with a GPS chip is needed.

There is a potentially nefarious edge to Moves. I mentioned that my data, along with every other user’s data, is pushed to the cloud. That’s fine as long as it is used to make attractive maps of my walks. But ProtoGeo Oy, the company which developed Moves, was acquired by Facebook in 2014. Soon after, the Moves Privacy Policy and Terms of Service Agreements were changed. At the time, Facebook promised not to merge Moves data into its own massive database of user information. But…

I’ll likely turn off Moves, now that I have mapped my 52 weeks of walks. What Move-O-Scope’s handsome graphics have shown me over the past year is something more revealing than a collection of data points that can be manipulated for all manner of purposes, good and bad. What I see is a work of art, born from a need to discover, sketched with my feet.

Screenshot of the Move-O-Scope interface, showing buttons and sliders that can be used to filter my walking activity.

My Winnipeg walks in the context of the entire city.

A view of my Winnipeg walks, slightly zoomed in. 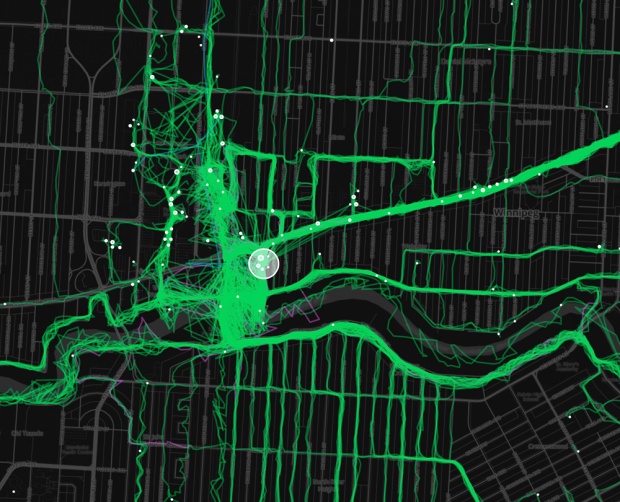 Destinations are indicated by the white circles. The larger the circle, the more time I have spent there. The large circle is home.

Home turf in Winnipeg’s Wolseley neighbourhood. ‘Places’ has been unchecked. The purple and blue lines indicate running and biking, respectively. Slightly inaccurate in that I have only walked these routes.

Walking the Grand Rounds in Minneapolis (as described in an earlier walkclickmake post). The orange line is Gail and I driving from Winnipeg to our hotel in the city and then driving back to Winnipeg. Otherwise, our car remained in the parking lot for the duration of our stay.

Gail and me walking across Ireland earlier this year.

A global view of my year’s walks. Humbling.

The Moves app on my iPad Mini. A sideways swipe takes me to my walking activity on previous days.

A vertical swipe allows me to inspect this day’s activity.

David Firman, photographer, writer and creator of WalkClickMake. I'm usually behind the camera which makes this photo fairly rare. Thanks to my wife, Gail Perry for taking it (we were on the Camino de Santiago) and, more importantly, editing the text for every post!