The fifth of a series of jaunts in the key of white. This week: part one of a January 26, 2018 walk along Winnipeg’s Assiniboine and Red Rivers.

Is it a gift offered up by nature? Or is it nature conspiring against the city? These are questions that come and go from my mind as I make my way down nature’s highway, along the frozen surface of the Assiniboine River and, later in the day, the mighty Red.

Below the thick ice I walk on, wild waters still surge on their way to Lake Winnipeg. Dangerous waters that take lives, carve river banks and flood neighbourhoods. Without mercy.

The city presses around river edges with clear disdain. Harsh grids of roads run into its banks. Bridges ignore the rivers’ might. Homes and apartments lay claim to shoreline forests. Commerce and industry turn their ugly backs to it.

But nature upends the city plan. It freezes its rivers. It creates a new world with its own roads, its own views, its own rules. It creates a vantage point, a place to witness its power, to see what we have done to the course of its rivers, the good and the bad.

This is a good year for river-walking. It has been consistently cold and the rivers have frozen earlier than usual, two of several factors that have left the ice surface smooth and navigable by walkers, skaters and bikers. So good that I can walk to the end of our street in the Wolseley neighbourhood, to the mouth of Omand’s Creek and follow the Assiniboine and Red Rivers for 10 kilometres. That is today’s mission: walk the two rivers and return. A 20 kilometre journey.

It is a rare, balmy day with the temperature expected to hit a high of -5º C. The world I enter is white-on-white, overcast and foggy. A fine mist gently coats my glasses, just enough to add an ethereal glow to the day.

The first leg of my walk follows informal trails along the Wolseley shoreline of the Assiniboine River. A recent warm snap softened the ice, making it unsafe for passage. Today it is frozen once more, its surface smooth and bare. I pass alongside the efforts of riverside residents to create skating rinks on the river, currently in a temporary state of desertion while the river thaws and freezes.

Across the river are the oversized mansions of Wellington Crescent. As is the case in most parts of Winnipeg, both river banks are all private property. It is only during our winter freeze-ups that nature gives us the right to experience our rivers as the public spaces they ought to be.

It doesn’t take long to reach Arlington Street. From the river’s surface that asphalt road is all but invisible although the original intent was for it to continue across the Assiniboine and into the River Heights neighbourhood. Today, it is no more than an invisible marker denoting the start of the Red River Mutual Trail on the frozen water. From here on, I will be walking the river for seven-plus kilometres to the trail’s endpoint near Churchill High School.

A trail has been blazed along our rivers for at least ten years now with the 2008 version laying claim to a Guinness World Record as the “world’s longest naturally frozen skating trail”, coming in at 8.5 kilometres. The following year, the trail reached past our house and all the way to Assiniboine Park, a never-surpassed 9.3 kilometres. Since then, the trail length has been shorter, its ultimate length left to the whim of natural forces: temperature, snow and water volume.

Beyond records, the trail is remarkable for its multiple uses. There is a skating trail that is regularly groomed. But there is also a parallel walking trail for skate-adverse pedestrians like me. As I make my way down the walking path, skaters of all skills glide alongside. Out of the mist, the apparition of a city appears: hospitals, condominium towers, bridges. And, as I approach the Osborne Street bridge, a form slowly reveals itself below the bridge’s concrete arches.

The first of the warming huts.

Part Two will be revealed next week as I continue my ice-walk along the Assiniboine and Red Rivers. 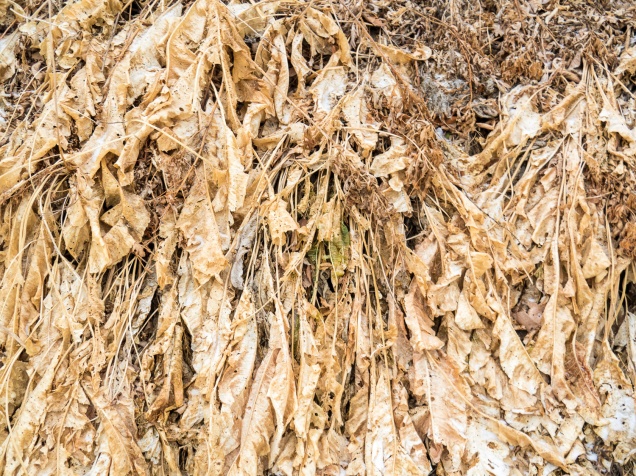 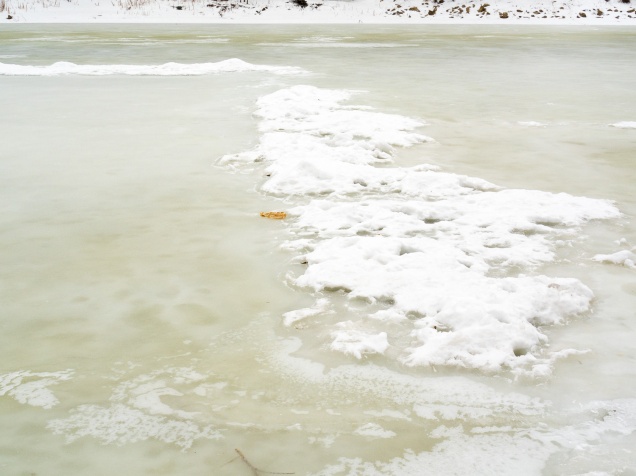 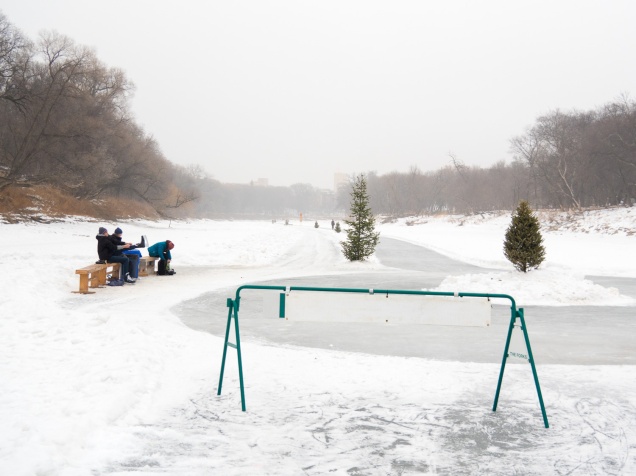 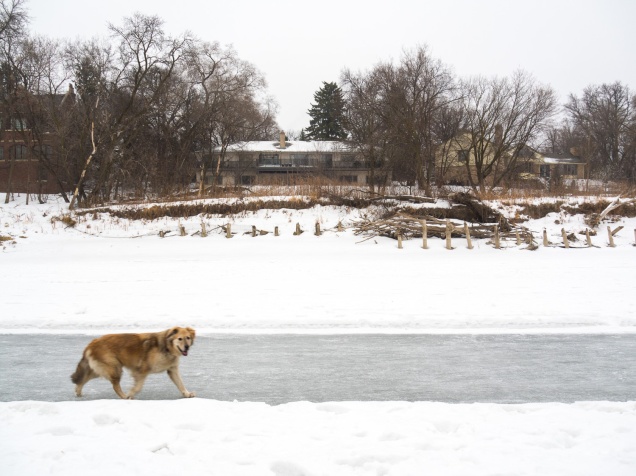 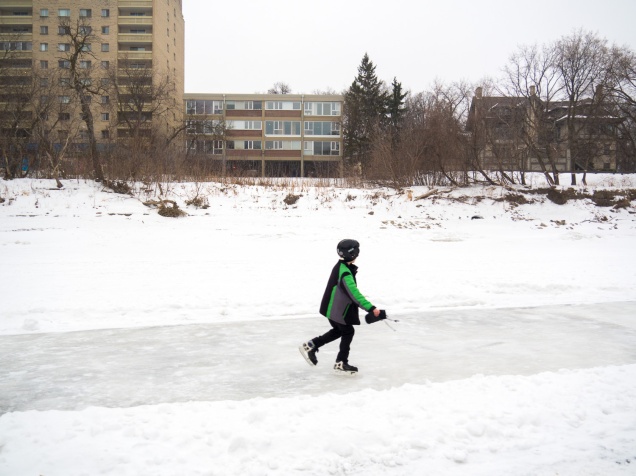 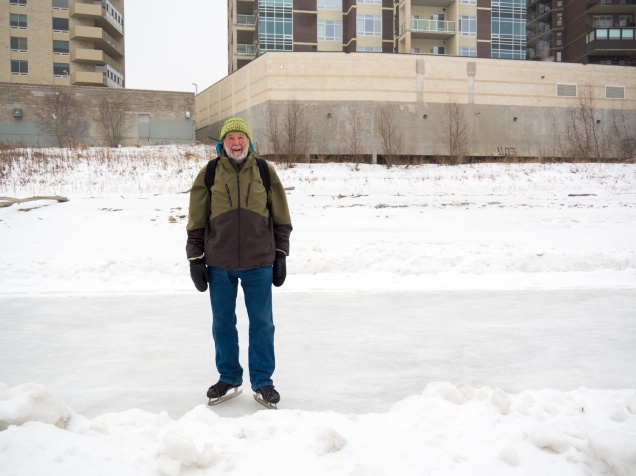 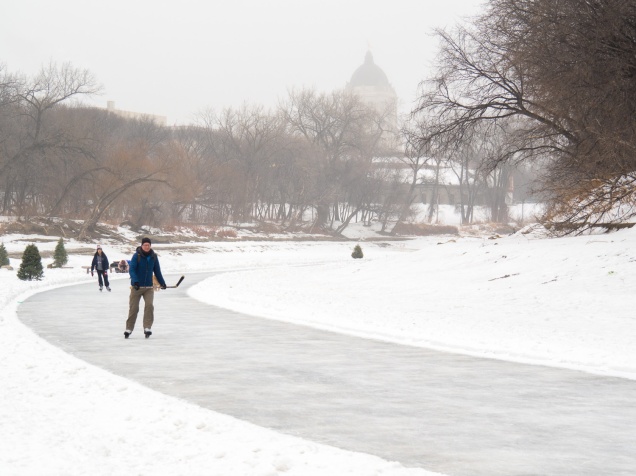 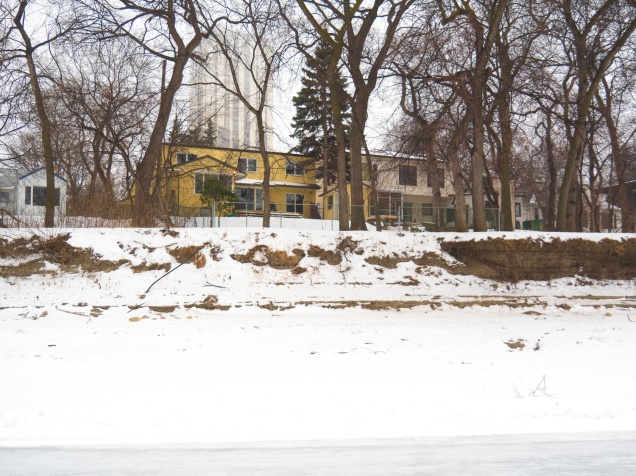