One of Mexico City’s sixteen boroughs, Xochimilco is, in some respects, the heart of the city. The vast lake that once covered the Valley of Mexico—including the entire site of today’s Mexico City—was tamed 1,000 years ago with a network of canals defined by artificial islands, called chinampas. Canals were once the main mode of transportation throughout the valley. Since colonization, that vast network has shrunk to what remains in Xochimilco. Today, it’s not more than a remnant, an endangered World Heritage Site. Yet what is left is a remarkable, enchanting place.

Today, Xochimilco is best known as a playground. This is where Mexicans come on Sundays and tourists come at all times for an entertaining afternoon ride along the canals on colourful trajinera boats.

But, for Gail and me, the goals for our journey to Xochimilco have been deliciously disrupted. This is November 1, the first of two Days of the Dead.

We are on a night tour, ably led by Ubish of México Underground. It starts with a ride on Cositalinda, our trajinera for the evening, and a candlelight dinner of locally-sourced food. We head down lesser known canals, away from the boisterous party boats. Through the deep black shadows of willow trees—ahuejote—that line the canals, we catch occasional glimpses of white lights, a distant Mexico City. There’s a brief stop on a chinampa, a chance to meet a local farmer in a bed of marigolds. Xochimilco, after all, is the Aztec word for “flower field”.

Our nocturnal mission then takes a dark turn. A visit to Xochimilco’s cemetery of San Gregorio Atlapulco.

We carefully manoeuvre through the black, down narrow paths between cairns, tombs and markers. The many candles barely illuminate grave sites. Yellow marigold petals fall gently on grey stone. Bottles and cans of beers and mezcal await the arrival of rising ancestors. In the shadows, family members, on folding chairs, quietly await, sometimes gathered around open fires. And then, out of the dark, a roving band of musicians arrives to play a ranchera tune for the the dead.

On the cemetery’s main arteries, a larger party emerges. A brass band blows loudly accompanied by the sharp rat-a-tat-tat of a snare drum. Ghoulish costumes glow under sodium lights. People laugh, clap, eat, drink. It is an intoxicating mix of solemnity and celebration.

On the Canals of Lake Xochimilco 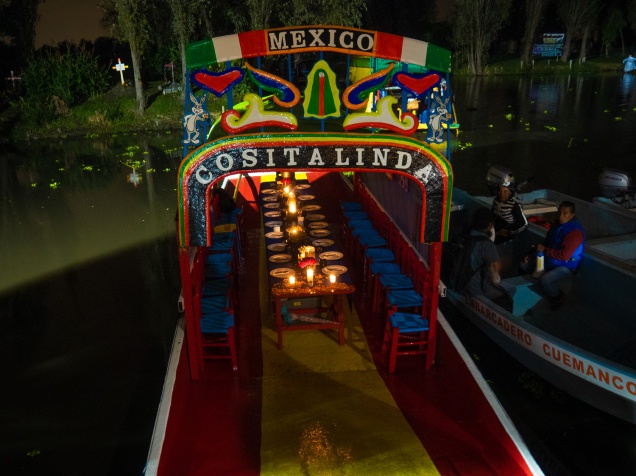 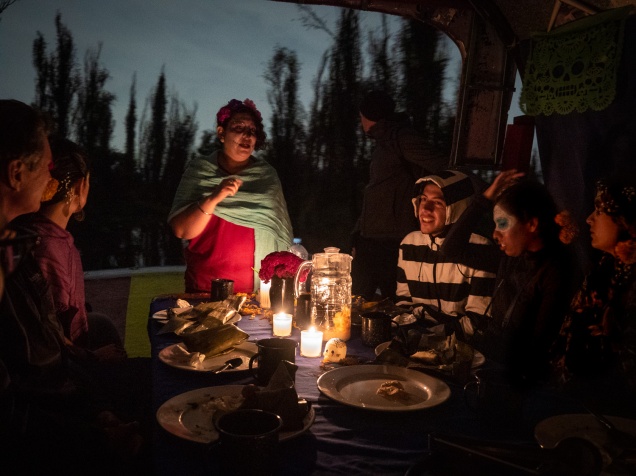 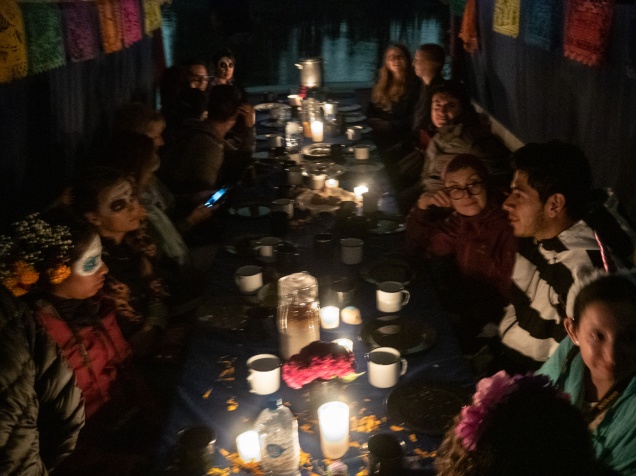 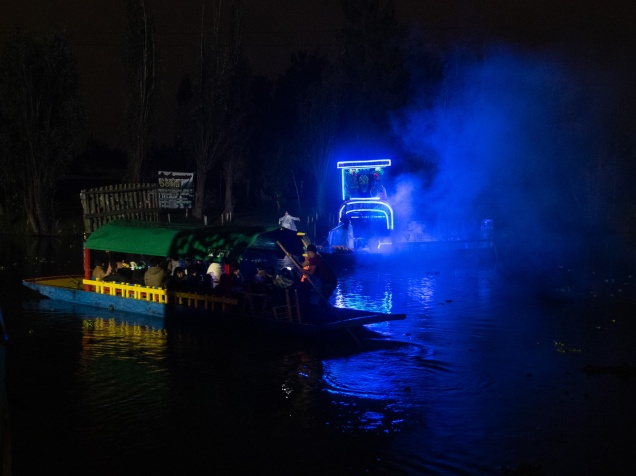 In the cemetery of San Gregorio Atlapulco 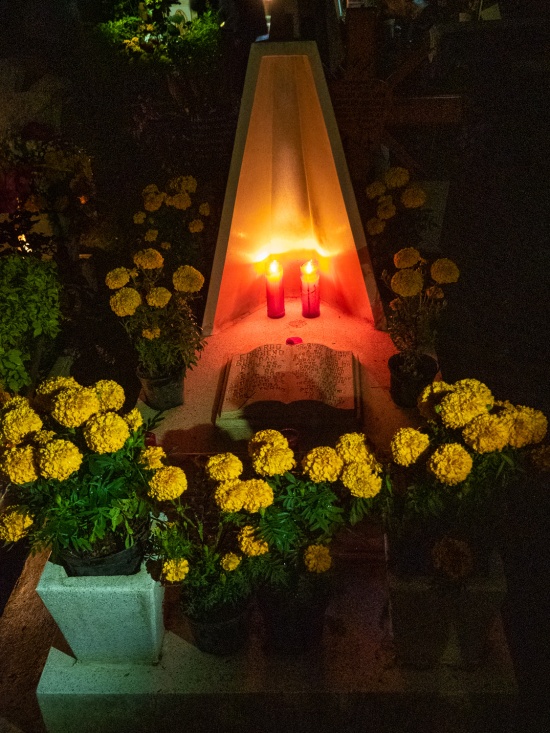 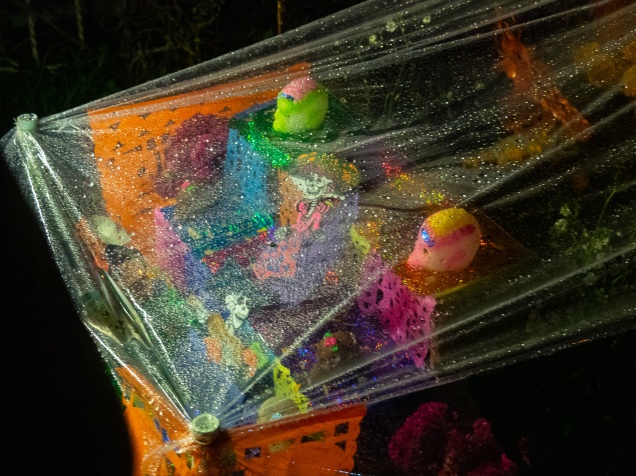 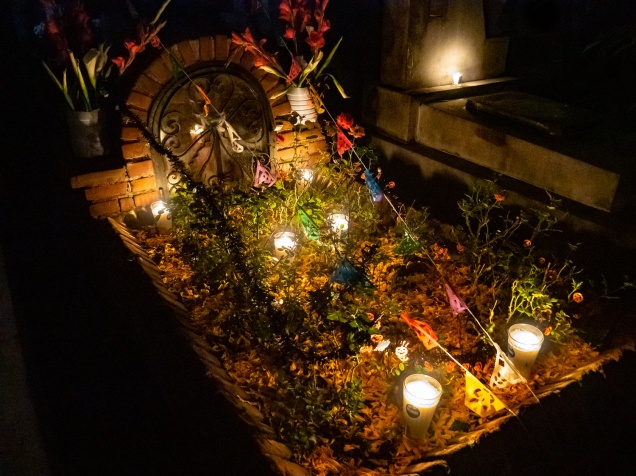 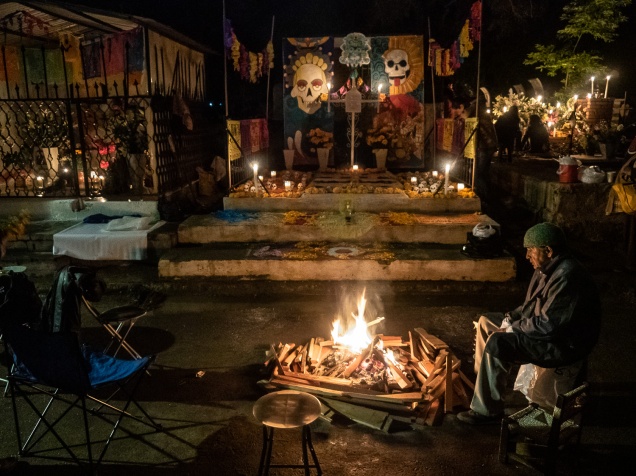 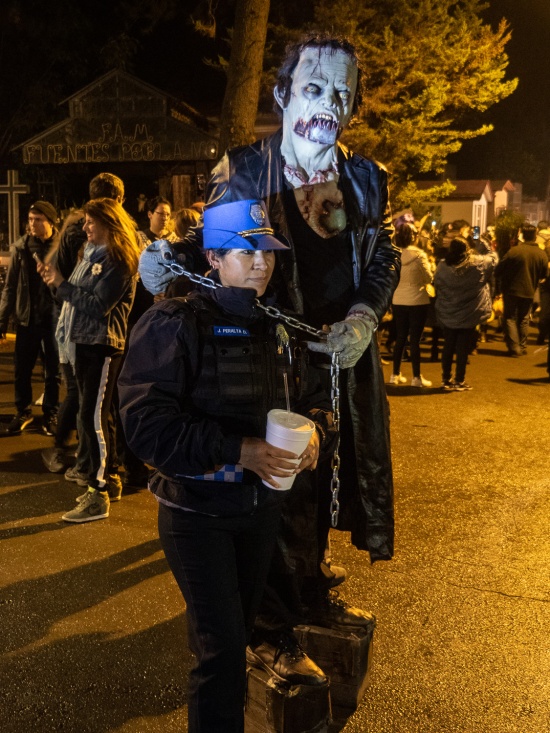 3 thoughts on “CDMX: Night of the Dead”