Our cruise ship slowly makes its way through Nagasaki harbour. Under the delicate spans of a cable-stayed bridge. Past Mitsubishi dry docks, busily fitting a new cruise ship. Past Catholic churches, their bright white walls and spires set against the dark greens of steep forested slopes. And onto the open sea.

We navigate around numerous uninhabited islands until one – our destination – appears on the watery horizon. A long, grey form crusted with ruins. From this distance it looks like a battleship and, indeed, it is locally known as Battleship Island, Gunkanjima. It’s real name is Hashima and the reason we and a boat full of other tourists are coming here is because of Hashima’s industrial history.

In 1810, coal was discovered on the island and by 1869 development had started on the Hashima Coal Mine. What followed was the rapid development of the island into a self-contained city with a peak population of 5,259. One mine shaft grew to four. Seawalls and land reclamation tripled the size of the island. Massive housing complexes were built. In 1916, the seven storey apartment building No. 30 was constructed, Japan’s first large scale reinforced concrete building. Schools, shops, cinemas, pachinko parlours were built to service the burgeoning population of miners.

Some of those workers were not there by choice. Between 1930 and the end of World War II, conscripted Korean civilians and Chinese prisoners of war were forced to work in the mines with an estimated 1,300 dying on the island due to mining accidents, exhaustion and malnutrition.

By the 1960s, petroleum was favoured over coal and, in 1974, the mines were shut down and the remaining population moved off the island. Hachima sat unoccupied for the next 35 years, its buildings battered by seas and  typhoons. In 2009, a landing dock was built, enabling visits to Hashima. In 2015, the island became a UNESCO World Heritage Site.

Our packed boat disgorges at Hashima’s new dock. Guides cautiously escort us on a prescribed path along the edge of the sea wall. It’s a glorious mess of ruins in a field of collapsed concrete walls. It begs to be explored more and the temptation to jump the fence and head into the remains is strong. But the years have taken their toll. Several buildings have been recently stabilized yet many are still in danger of collapse. Even from our restrained viewpoint, the island evokes a harsh life, so far out to sea, so isolated from the world. A metaphorical prison for the Japanese that chose to work here. A real prison for the forced labourers from elsewhere.

While those conscripts toiled on Hashima, back on the mainland, Nagasaki’s history was being redefined by a bomb.

Our journey continues at the north end of the city, at the Atomic Bomb Hypocentre. An understated black stone plinth marks the infamous dropping of the Fat Man plutonium nuclear weapon on the city. It was 11:02 in the morning, August 9, 1945. Within a second, 35,000 were dead. The total death count would rise to rise to 73,844 with a further 74,909 injured. Around the world, there have been – and continue to be – other battles and other wars with more shocking death counts. But here in Nagasaki, as well as Hiroshima, it was the instantaneous nature of the event, the callous click of fingers obliterating an entire community in one fell swoop that was so particularly evil.

Like the concentric concrete rings spreading out from the Hypocentre plinth, the site is surrounded by a number of worthy memorials, capturing the horror of that fateful day, questioning why it happened, demanding that it never happen again.

Nearby are the red-bricked Nagasaki City Peace Hall and the Atomic Bomb Museum. Most evocative is the adjacent National Peace Memorial Hall for the Atomic Bomb Victims, designed by architect Akira Kuryu (2000-2002). Glowing glass plinths rise from the depths of this subterranean memorial chapel and through the ceiling to reappear once more in the still waters of a rooftop pool.  It seems a perfect visual motif for this solemn yet hopeful place.

On the other side of the Hypocentre is the Peace Park, today crowded with uniformed school children, here to sing and learn. Behind them looms the Peace Statue by Seibo Kitamura. The sculptor writes:

After experiencing that nightmarish war,

Who could walk away without praying for peace?

This statue was created as a signpost in the struggle for global harmony.

it conveys the profundity of knowledge and

the beauty of health and virility.

The right hand points to the atomic bomb,

the left hand points to peace,

and the face prays deeply for the victims of war.

Transcending the barriers of race

and evoking the qualities of Buddha and Go,

it is a symbol of the greatest determination

ever known in the history of Nagasaki

and the highest hope of all mankind. 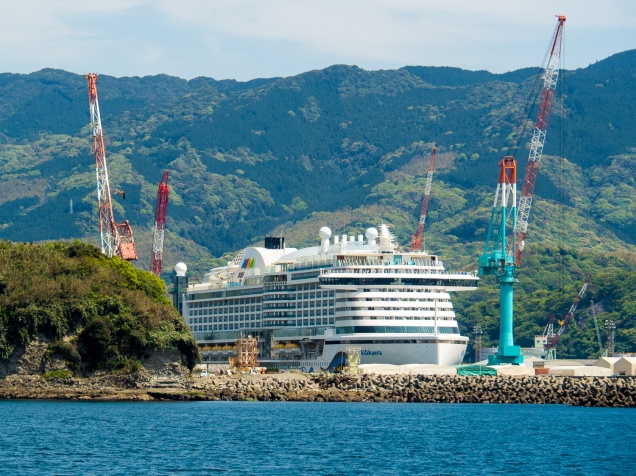 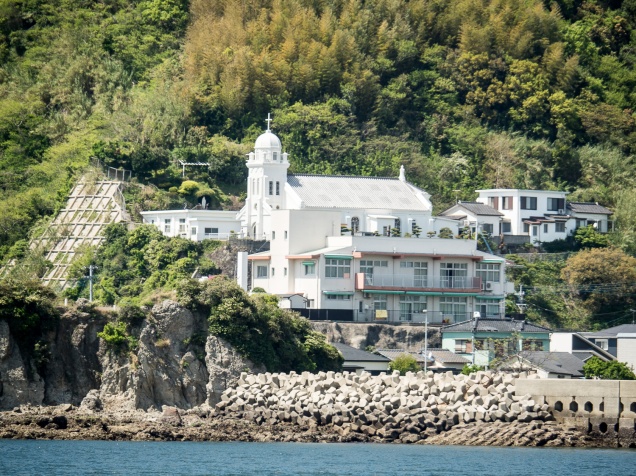 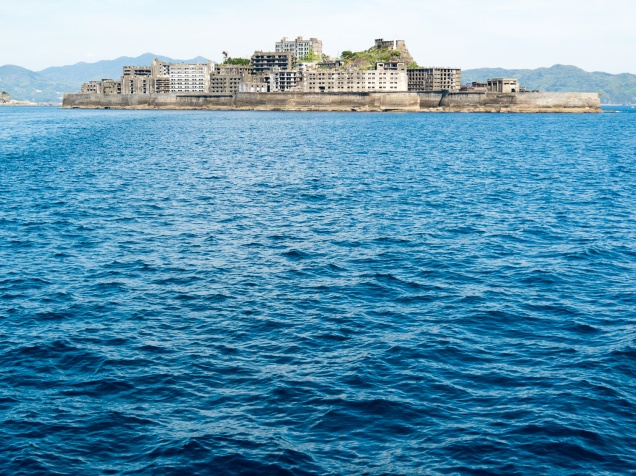 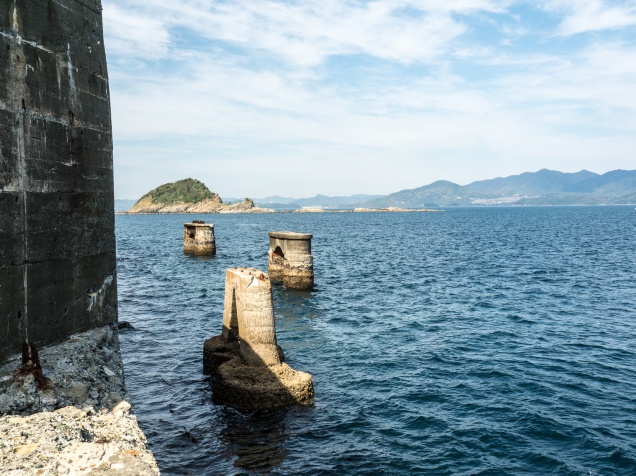 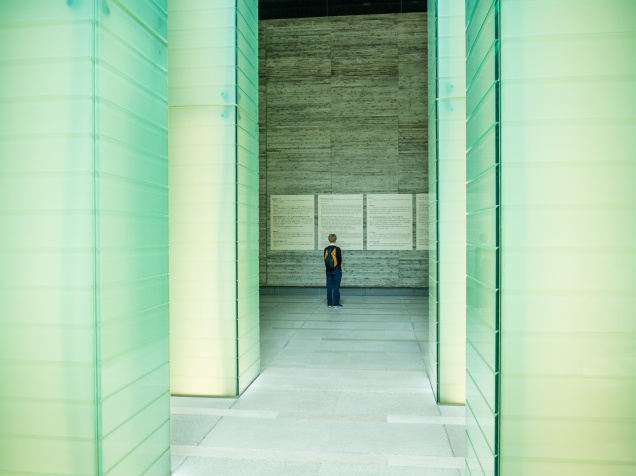 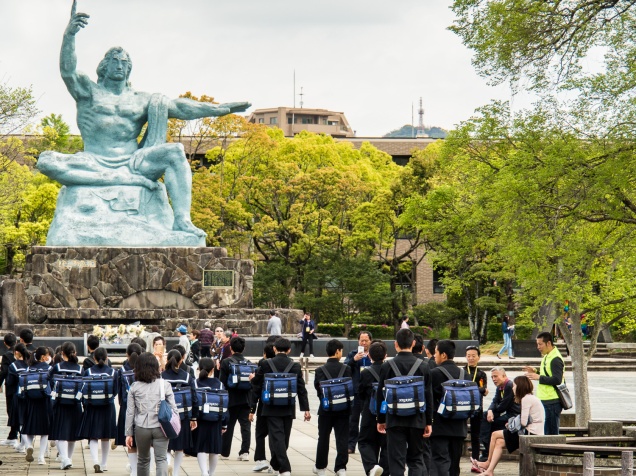 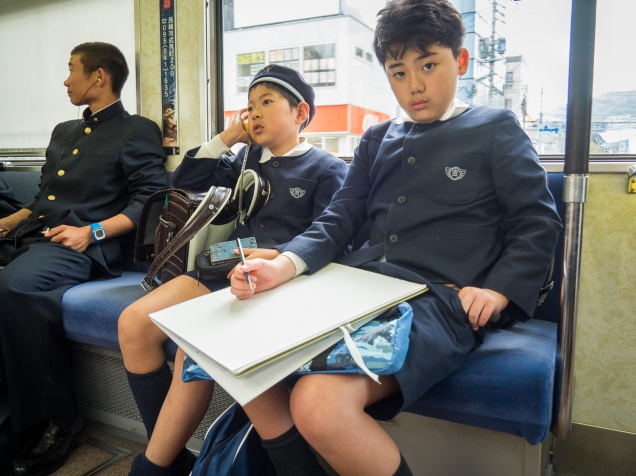 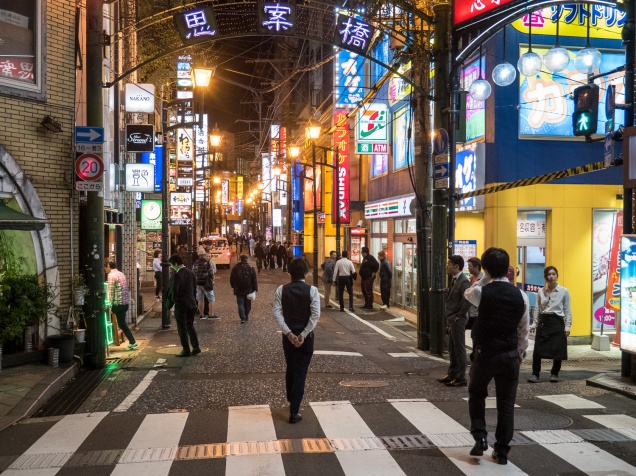 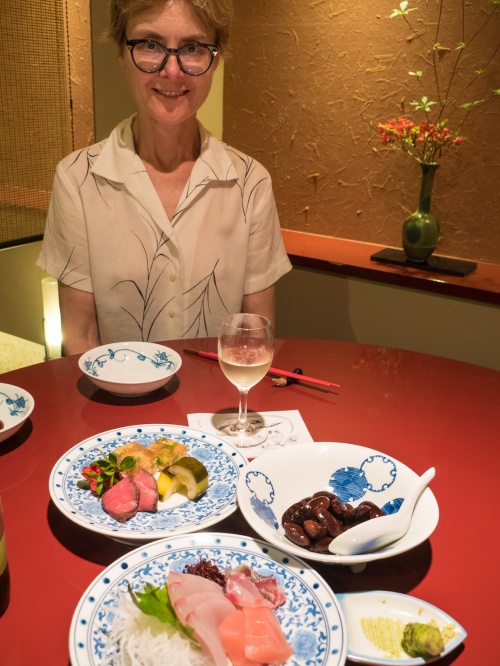 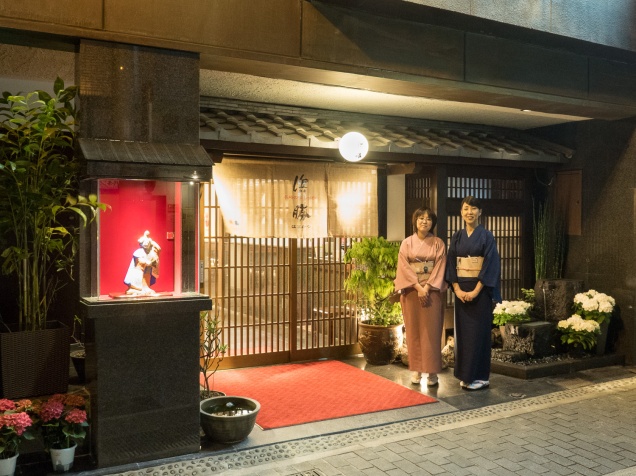